FIXER ALERT! Located on the highly-desirable (and rarely available) 1-block-long Greenacre cul-de-sac street, this 1940's California bungalow offers buyers with a penchant for remodeling a great place to start. Original oak floors (in need of refinishing) reflect the abundance of natural light that streams through banks of (mostly newer) windows. A floor-to-ceiling casement window anchors the formal living room. Charming dining room. The mostly-original kitchen provides direct-access to the home's 3-car (tandem) driveway and separate 2-car garage. 2 bedrooms with plus-sized closets flank a bathroom with separate tub and shower. Ample lot with room for "enclosure" in the front (take a look at what neighbors have done on either side) or expansion. Permit parking 7P-7A. High "walk score" (91 of 100) because of two parks (both with tennis courts), plenty of restaurants (Jones, Food Lab, Rock'n'Roll Sushi, Starbucks), work sites (The Lot), and shopping (Target, Ralph's, Smart and Final, Whole Foods) nearby.

1941 is most-remembered for “a date that will live in infamy.” On Dec. 7 of that year, Japan attacked Pearl Harbor and FDR asked for a declaration of war on the Empire of Japan. On the mainland—and specifically in Los Angeles—pride and anxiety were running high as the war in the Pacific began in earnest. Also, a housing boom was happening in L.A. The early 1940’s saw the rise of “Traditional” and “California bungalow” styles—no surprise that the design influences of Italy and Asia were nowhere in sight. In Hollywood, the movie business was booming, too: “Citizen Kane,” “The Maltese Falcon,” and “How Green Was My Valley” were up for best picture (the latter won).

Also in 1941, in reaction to world events, patriot-themed films like “Yankee Doodle Dandy,” “The Pride of the Yankees,” and “Holiday Inn” (featuring the original song, “White Christmas”) were being shot in and around L.A. for their scheduled 1942 release dates. And in 1941, 36 modest bungalows were being constructed on a cul-de-sac street (in what later would become West Hollywood), one block away from the United Artists Pictures lot (now known as “The Lot”). The developer’s idea was that these mostly two-bedroom homes were meant to be occupied by electricians, sound engineers, camera men, and set builders. Eventually, they were; along with two silent movie actresses who’d been left behind by “talkies.”

In a way, Greenacre Avenue had also been “left behind.” Surrounding it on adjacent streets were single-family homes and multi-family duplexes and 4-plexes built during the silent movie boom of the 1920’s. During that decade and one to follow, the land which eventually became Greenacre Ave. was owned by a hard-headed business owner who operated a successful poinsettia farm on those acres. He’d been approached many times by developers, but resisted, and continued selling his flowers and plants to nurseries and florists. After he passed away, his family quickly sold the land (in 1939) and the series of “star bungalows”—reminiscent of the movie stars’ stand-alone dressing rooms sitting a few hundred yards away at The Lot—were built and sold.

The homes all pretty much looked alike; simple finishes and facades, war-time conservatism apparent in their functionality. The cul-de-sac itself was necessary because a couple of 1920’s apartment dwellings had been constructed on the south side of Fountain Ave., effectively blocking Greenacre Ave. from ever going north (it is only accessible from Santa Monica Blvd.). Today, the cul-de-sac “represents” almost as if it’s still the days of WWII. While the areas around Greenacre Ave. have developed, the street stands as a testament to a time gone by—but now finds itself smack in the middle of West Hollywood’s burgeoning East Side development boom.

Rarely does a Greenacre bungalow in original (“fixer”) condition come to the market. When they have in the past, they’ve been snatched-up by those who value the solitude of the dead-end street, the highly-desirable location, and the uniqueness of the block. 1232 Greenacre Ave. is a 1,296 sq.ft. two-bedroom, one-bathroom bungalow on a 5,153 sq.ft. lot with a two-car garage. Only 3 owners have resided at 1232; the most recent stayed for over 25 years until he passed away earlier this year. Everything here is in need of updating. Remodeling is required. Expansion is possible. It’s not a blank canvas as much as it is a framework from which to imagine next steps.

Much like the films of 1941, Greenacre's bungalows stand as unique, rare, and—although representative of a time and place changed by progress—remain as enjoyable today as they were 77 years ago.

Some photos have been retouched as examples of what landscaping could look like. 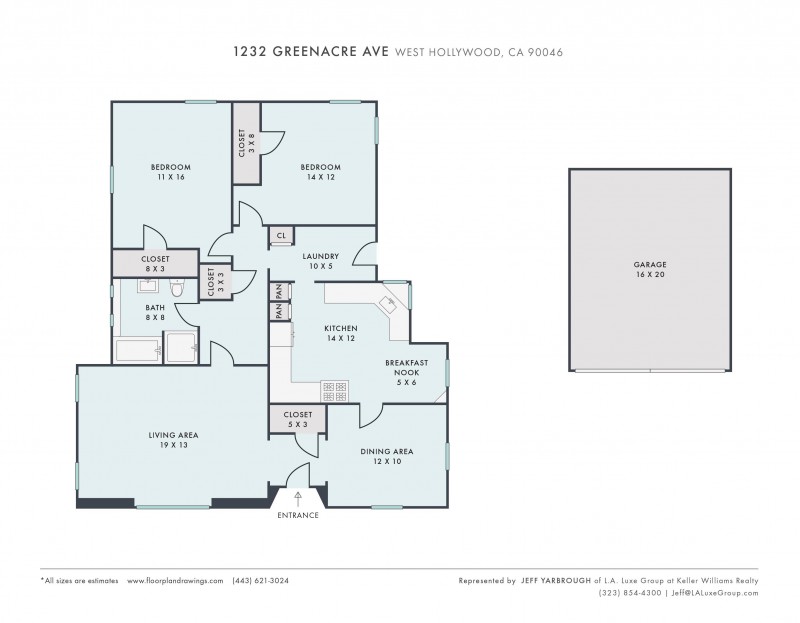 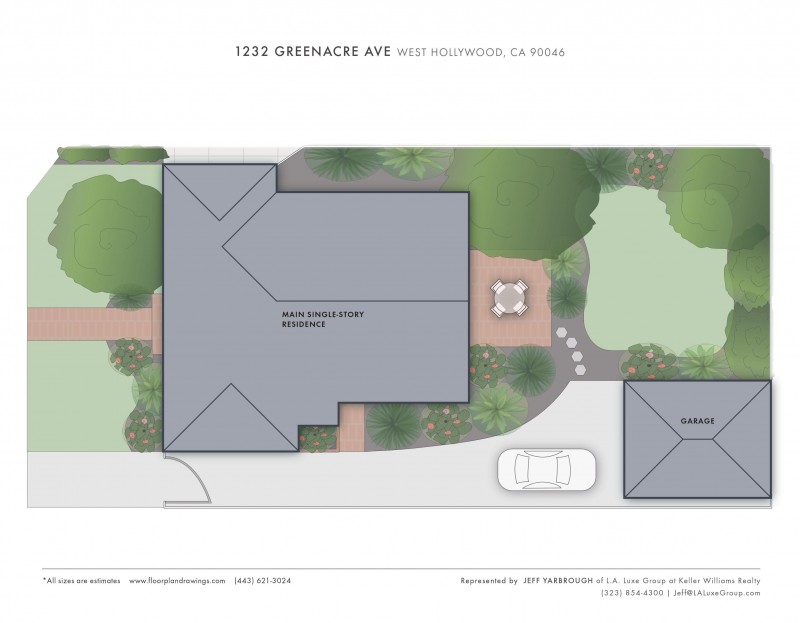